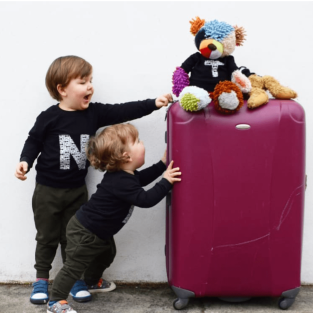 Flying with toddlers is not for the faint hearted, the disorganised or those who care too much about what the people around them think.

– When flying with an infant you may have to check in at the airport and will not be allowed check in online.

– The bassinet offered on flights is a great idea in theory but the baby/toddler will have to be removed, immediately, every time the “fasten seatbelt” sign comes on through out the flight. So it wasn’t a runner for me, I’m not that brave!

– On most long haul flights you may pre book and pay extra for certain seats with or without a bassinet, but the aircraft type could be changed that week or that day. So you must discuss what you’ve booked and paid for and what you have actually been allocated ar check-in and try and negotiate the best you can after that. Personally Aerlingus ground floor staff and in flight staff could not do enough for us or have been any more accommodating. I was blown away and was not expecting the standard of service we received.

-Some main airports have playrooms freely accessible to passengers with children. They vary greatly in quality but if delayed or have allot of time on your hands you could be very grateful for the distraction and change of environment. We didn’t attend it in either as it was in a different terminal in Miami and we were tight on time in Dublin so didn’t even look for it.

-Long haul flight food: you can pre order a kids meal free of charge before you fly online through the “manage” my trip link. Infants, toddlers and older children all appear entitled to this service. This could be very important if you think the standard meal will not be suitable. Travelling to the USA the boys got pasta salad, brown bread and a chicken dinner with roasties and veg with a kind of tomato based Italian sauce. They both liked it. Both pasta lovers turned down the pasta salad as it had a vinegary dressing on it. On the return trip we ate prior hoping for sleep. So we didn’t actually see the meal as I hunted the flight attendant on sight, fearing he’d wake one🤣

What I did to make my life easier flying:

-Backpacks for hand luggage only, always have your hands free. Rob, Ned and I all wore back packs. I tried to avoid a wheely suitcase at all costs as i felt it was too much hassle with a stroller and could even be accidentally abondoned when chasing a toddler, and abandoned luggage at an airport is a no no! 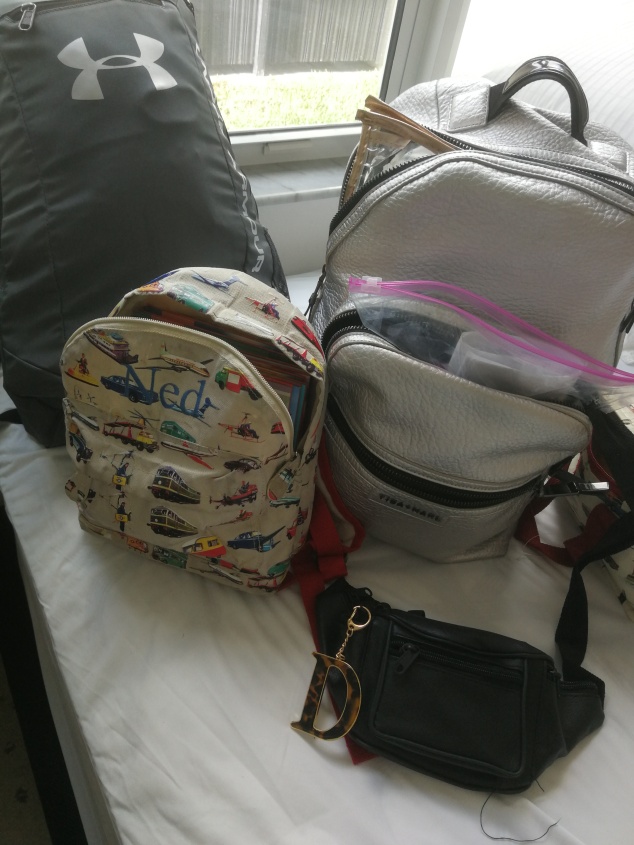 -Travel Stroller, this was essential in the airport and holiday for both Ned and Billy. It was always in use for one of them. I had a few recommendations for a carrier or sling and i think for us this would have been a disaster. Billy is quite heavy for one and secondly a carrier in the Florida heat would have finished us. Finally Ned was grateful for the stroller on several occasions during the week. (For small babies a sling may be more appropriate but i imagine you still have to buckle baby in correctly whilst flying even if slinged, Im not sure. (So worth checking if its a concern)

As expected our stroller did not come off in Dublin but was delivered three days later. I would not spend too much on a travel stroller, think second hand and Aldi baby event do one. If it doesn’t get lost it’ll get damaged 😉

-Food and snacks; just have a never ending supply and separate supplies for the different legs of the journey. Car, airport, flight, airport, car arrival. At your destination have something to hand if there’s nothing laid on and every where is closed.

*Travelling to America from Dublin, you pre clear customs in Ireland which means you are incredibly restricted as to what food you can take on the flight. Formula is fine but you will have to check the customs list to see what you will be allowed.

-Beakers and bottles: have whats familiar to them with you. Keep them hydrated through out the flight as all that dry air and air conditioning can be very dehydrating. Both boys drank so much on our flight, I was really surprised. We were bottle/formula free thankfully, but if you’re not, I would recommend extra than your estimated amount if you are still on bottles. Some could spill, leak or like I say they could just be uncharacteristically thirsty!

-Blanket or sleeping bag incase the flight is cold. I brought their familiar Babyboo sleeping bags. The flight to Miami was roasting so neither boy needed them. Same on the flight home neither was necessary.

-Comfortable clothes:its not the time to think style. Think joggers, runners for travelling and even pjs for the kids for the flight if you like. -Headphones: this type in the pic worked well for both Ned and Billy and avoided alot of frustration from using other alternatives like earbuds provided etc. These are Penneys finest, so not the end of the world if they get broken. 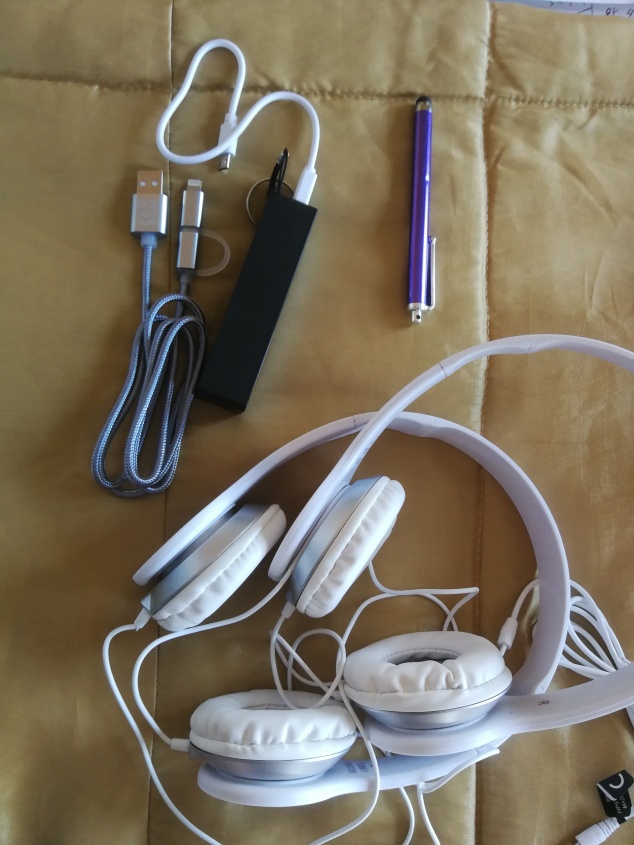 -Ipad and Netflix:  is essential. Its not the time to try and be the perfect parent.. its survival! If they clock up screen time like never before, so be it. Get through the flight with minimum hassle and battles and you are the perfect parent! Also remember the rest of the week until the return flight can be screen free if you are so inclined. The in flight entertainment provided is fantastic but not for the under 5s. I didn’t find it incredibly helpful. The odd movie held their attention, definitely not a full movie. So get their favourites loaded.

N. B. Netflix has a smart download feature “turned on” is the default setting. A fantastic feature for adults  but not for kids and not for travelling. Turn it off. This feature to save your storage automatically deletes what you’ve watched because adults don’t  re-watch an episode of Paw Patrol ten times! This feature will leave you in the air with no downloads and no WiFi!!! Game over, ball burst. 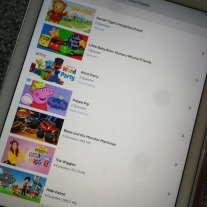 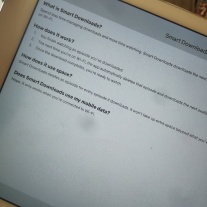 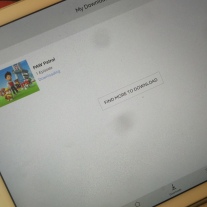 What I gave my boys for take off:  I gave both boys Neurofen (I discussed this with a doctor before we flew). Once sitting on the plane I gave it to them and I gave both a lollipop, Ned had his, Billy dropped his within seconds and it rolled back the plane, never to be seen again. Both boys didn’t appear to suffer any pain or discomfort from take off or landing. Neither boys have soothers and I certainly wasn’t starting the habit of a life time for a weeks holidays. I offered food and drinks to keep them sucking and chewing until I felt it had passed popping stage based on my own ears.

-App: Starfall abc – this is a free app Ned enjoys and its old school, no Wi-Fi necessary. Handy in the car too if you need to keep them busy or awake. 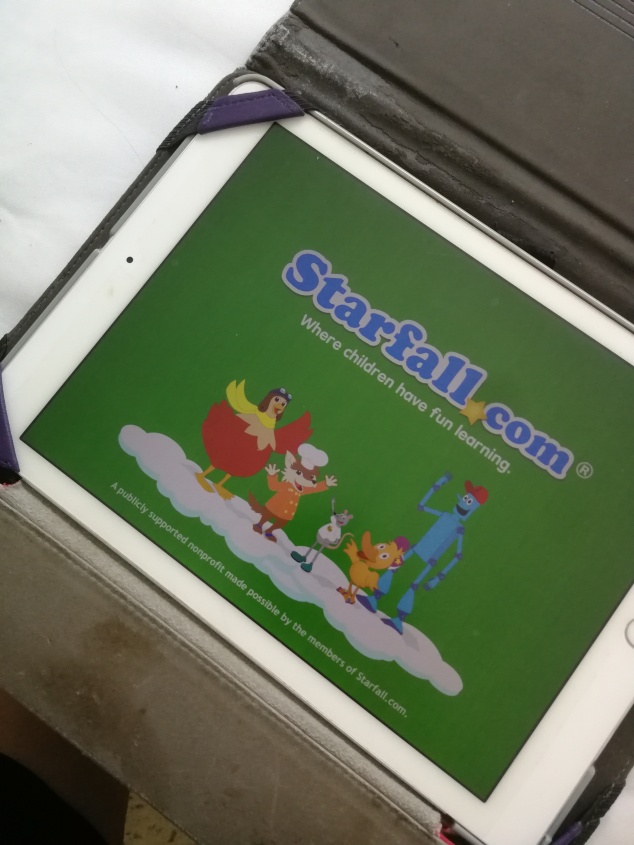 -Stickerbooks, you can never have too many stickers

-Water Wows, these are like mini themed aquadoodles. We filled the pens from their beakers and a pen or two completed the full book. These were a huge hit on the plane and through out the holiday. They’ll be used in the car and restaurants now we are home.

-Postit: to pull apart and stick on the seat, table, wall in front of you and pull off again! This is a real busy baby activity.

-Activity books- Peek and seek, or whatever your child stage is able for, something engaging.

-Dinky Cars/dolls/dino some small of whatever floats their boat.

-Puzzles that come in a book if you’ve a jigsaw lover. Each page has a different puzzle to fit in it, so no surface needed and no lost pieces.

-Scribble board like an etcher sketcher type thing, Smyths and Dealz have the mini ones.

-Cups! The baby Set of cups was made use of on every leg of our trip. Plane, bath, pool, beach.. by both boys for all sorts. Towers, castles and treasure collecting on the beach, you name it, the cups proved so handy! 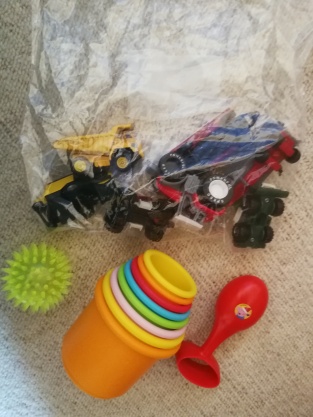 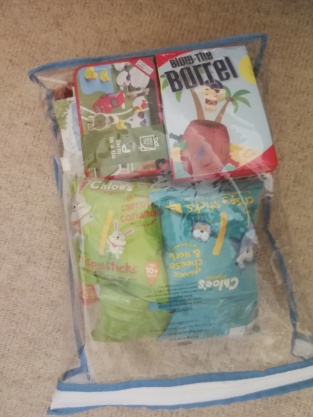 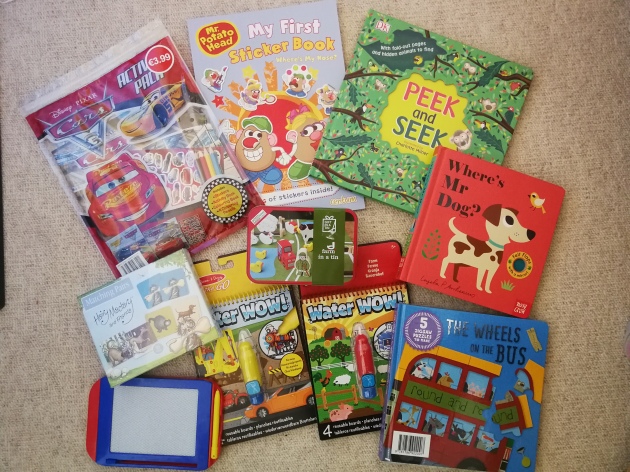 *Speak to Fiona owner of Littleones.ie and have a browse of their website they have a brilliant selection of travel fun for all ages including the water wows.

I totally over packed but better safe than sorry. What I didn’t need I never gave them and hid them away for a rainy day at home.

Most importantly, remember, don’t stress as they will feel every ounce of it. If you are stressing or under pressure try and advise your partner/husband to take them for a stroll while you deal with it or if its not one of those scenarios make it into a game. Like when you’re late, grab a toddler each and tell them its a race to finish line, who will win 😂 (this may have happened)

Scanning teddy in security is the doctors check up and you have to call him out the other side.  And finally as my dear friend Tara advised me when in the queue play Eye spy for colours and sounds etc. Whatever their level is, sing songs they like and don’t be afraid to let them investigate their surroundings within safe limits. They’ll get pretty frustrated if they are being pulled back or told no throughout the entire journey

Most of all remember you’re travelling, its not suppose to be a chore, its a choice a break from the norm. Remind yourself what you would be doing if you were at home and remember the end goal.

Rob and I decided to prepare for the trip as best we could. Hoped the flight went well but if it didn’t and was a total shit show for the eight hours, we would park it at the airport and get on with the weeks adventures at hand not to dwell on it..  enjoy our holidays.

As always I would love to hear your feed back or if you’ve any other suggestions from your travelling experience. I’m always learning and love to hear a good tip I can take on board (pun absolutely intended😋)

2 thoughts on “Flying with Toddlers!”